The Modes of Court Interpreting

Posted by Jocelyn in Interpreting on June 20, 2008 3 Comments 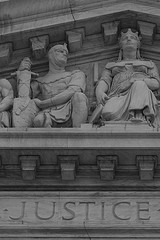 Court interpreters have a difficult and complex job.

They are not only expected to know two languages completely, they must also know and use various forms of those languages. Court interpreters regularly work with a range of people, including judges, attorneys, witnesses, litigants, and experts in specific subject fields, such as medicine or forensics. To interpret for such a broad scope of courtroom participants, an interpreter must have a considerably large vocabulary that includes legal language, subject-specific language, formal standard English, and colloquial expressions in both the source and target languages. To top it off, there are actually three different kinds, or ‘modes’ of interpreting that each require slightly different skill sets. In the following paragraphs, I will describe each of the three modes.

Simultaneous interpretation is the mode in which the interpreter lags slightly behind the source language speaker, interpreting the message into the target language at almost the same time as the original message is being said.

In judicial settings, simultaneous interpretation is most frequently practiced from English into other languages. It is used for most stages in proceedings that heavily involve speaking by or between attorneys and judges, such as arraignments, motions, and jury instructions. Because the majority of proceedings take place primarily in English with attorneys and judges speaking, many interpreters practice simultaneous interpretation more often than any other mode.

In consecutive interpretation the interpreter listens to a unit of speech in the source language and then conveys that message into the target language. Although the length of the passage rendered can vary, most literature points to a standard norm of approximately 40-60 words at a time. In the courts, consecutive interpretation is commonly used for interpreting messages from a litigant with limited English proficiency, which most often occurs in client/attorney interviews, or on the witness stand.

Many interpreters think that consecutive interpretation is the most challenging mode because of the necessary memory retention and note taking skills. In performing this mode, the interpreter must store heard information, recall the information, and then restructure the information in the appropriate linguistic form. The speed of the delivery of information, as well as the complexity of the subject matter, or length of the speech will likely alter depending on the speaker, requiring the interpreter not only to listen attentively to the delivered orations, but also to listen and process different levels and types of discourse. The possible range of content and potentially unpredictable nature of the discourse necessitates that an interpreter have an expansive vocabulary and complete competence in both languages.

Sight translation is the oral interpretation of a written document. In courtroom settings sight translation is often used to provide oral interpretations of standardized, routine written documents in English, such as waiver of rights forms, DUI forms, and police reports. In many routine procedures the sight translation of such documents is performed so that a defendant with limited English proficiency is able to understand. Occasionally, informal or formal documents in the foreign language are presented and the interpreter must interpret these into the English language for the court’s benefit.

Although interpreters may be given the opportunity to review a document prior to performing a sight translation, they usually must read quickly and anticipate the content of the written text without fully reading the entire text. Comparable to the skills needed for simultaneous interpretation, sight translation requires that the interpreter use predictive skills to help them process information and create context for an incomplete message. Interpreters are often reading ahead and processing upcoming information even as they are conveying a unit of the text.

I look forward to my next post on the Ethics of Court Interpreting.