Home » Beyond Words » The Story of Olé 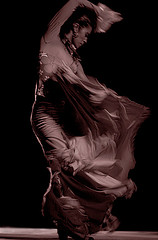 In a recent lecture, author Elizabeth Gilbert discusses the history of the concept of creative genius.

She takes her audience on a trip across several continents and reaches back to antiquity to explain the major shift that took place during the renaissance, when artists were first referred to as geniuses.

Before the modern humanist era, creative genius was not attributed to individual people, but to inspiration from the spirit world: daemons in ancient Greece, muses, genies, and, as is made evident in the etymology of the Spanish word Olé, even Allah.

The Moors of Northern Africa ruled the area of the Iberian peninsula known as Spain for nearly 700 years. Their language was Arabic, and no language other than Latin had a more profound effect on the history and evolution of Spanish. Today, over 4000 Spanish words come directly from Arabic, nearly 8% of the Spanish lexicon. One of those words is Olé.

As Gilbert explains in the lecture, there existed an ancient tradition among many Moors to have great celebrations that included dancing. When a dancer performed at the highest levels of grace and intensity, for that moment, they were believed to be vessels through which Allah was acting, and the moment allowed the witnesses to see a glimpse of Allah’s power through the artist. So, it was customary for the Moors of Northern Africa centuries ago to exclaim Allah! when a dancer was performing in such an inspired and moving way.

Hisham Aidi, of the group Islam Awareness, notes that there existed a heated debate over the Moorish influence in Spanish culture for much time, well into the 20th century. While many scholars refused to acknowledge Spain’s Muslim and African past, or saw it as a negative influence if they admitted it at all, a few sought to celebrate that heritage. The poet Manuel Machado proudly declared himself a member of the “Moorish race, a race from the land of the sun,” and the celebrated Spanish writer Federico Garcia Lorca confessed his “feeling for those who are persecuted…the Moors.”

Somewhere along the course of it’s long history in Spain, the word Olé lost it’s connection to Allah, and became a common Spanish exclamation for any situation where human physicality inspires people to cheer, whether it’s a futbol match, a bullfight, or a Flamenco performance. In Flamenco, which shares perhaps the most intimate connection to the word’s origin, Olé is not reserved for marking transcendent moments (though it can), it’s really meant to give the dancer energy and encouragement.

No three letter word could capture as much Spanish history as Olé.