Posted by Daniel Echevarria in Language and Culture on March 3, 2010 3 Comments

It is estimated that over 50 million people in the U.S. speak two or more languages. The majority of multilingual residents in the U.S. live in cities, and, as language professionals, we were curious which cities in the U.S. are the most multilingual. We combed through census data and developed a scoring system that includes cultural and linguistic factors in order to rank the top multilingual cities in the country –places where a resident might be able to read a газета, have a quick bite of a عجين الفطير, and maybe even take in a few minutes of a poésie reading, all in the course of an average day.

In order to keep the rankings manageable, we included only cities that the 2000 Census cited as having more than 400,000 residents, leaving us with 40 cities. We ranked them using a calculated point system. Each of the 40 cities received a score between 1 – 40 in ten different categories. The lower the number, the better score for the city, as in the game of golf. Here is a list of the categories, followed by the ranking results:

We also compiled data sets on cultural and linguistic events and institutions in each of the 40 cities. With the cultural-linguistic data set, we attempt to go beyond population stats to highlight the diversity that multilingual places enjoy. We ranked cities on a scale from 1 – 40 in the following cultural categories: 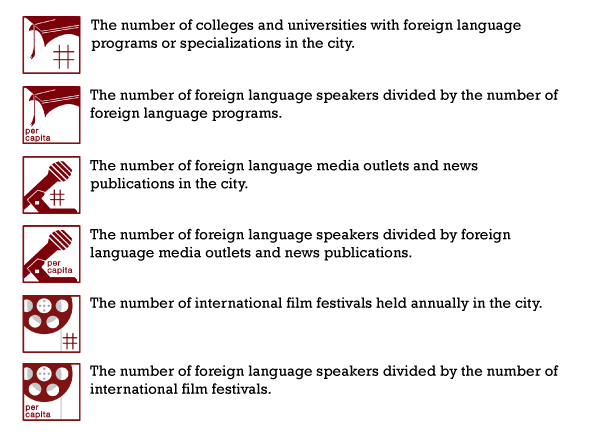 Leading off the group is New York City, which may not surprise many readers given that New York remains the most populous city in the country. According to census data, 47% of New Yorkers are multilingual. Almost 3 million New Yorkers speak languages in addition to English. If we would have included the city’s boroughs independently on this list, a few of them would have scored towards the top as well.

Frank Lloyd Wright once said, “Tip the world over on its side and everything loose will land in Los Angeles.” Languages certainly landed in Los Angeles and stuck around. Even more than New York City’s, Los Angeles’ population consists 57% of multilingual residents. The city has some of the nation’s largest cultural enclaves including Historic Filipinotown, Koreatown, Little Armenia, Little Ethiopia, Tehrangeles, and Thai Town.

Chicago has more than a million multilingual residents. An international business and tourist destination, Chicago is often referred to as The City That Works, but calling it The City That Speaks might be more appropriate. Among the famous cultural enclaves in Chicago is the Puerto Rican neighborhood Paseo Boricua.

With significantly large populations of Asian and Latin American immigrants, San Francisco has become a truly multilingual city. Almost 400,000 multilingual people live in San Francisco. The city contains several large cultural districts, and it even hosts the largest Chinese New Year Parade in the US.

Texas alone claims a third of the 15 most multilingual cities in the country, and Houston is the largest of the group. With more than 800,000 multilingual residents, Houston is the international Capital of the Sunbelt. Some parts of the city display Chinese and Vietnamese street signs for residents.

More than 37% of Dallas residents speak languages in addition to English. Although Dallas possesses a large Latin American population speaking both Spanish and English, the city also has a significant Korean American presence and a large Koreatown in the northwest section of the city.

Boston has a population below 600,000 people, but it still manages to rank highly due to the diversity of its residents. A quarter of the population in Boston is foreign born, and more than 30% of residents are multilingual. Take a trip to the Mattapan neighborhood to hear some Haitian Creole or trek to Andrew Square to hear some Polish.

More than half of San Jose’s population is multilingual. Approximately 460,000 out of almost 900,000 residents speak multiple languages at home. If you visit San Jose, you may have the chance to hear the wide array of spoken languages in one convenient setting: the San Jose Flea Market, which is the largest open-air market in the country.

Almost 47% of San Antonio is multilingual — a percentage likely influenced by the majority Latino population in the city. San Antonio is among the historic centers of Tejano culture in Texas, and both English and Spanish remain the most prevalent languages.

If the 200,000 multilingual residents of Austin are not helping “Keep Austin Weird,” they are at least helping to keep it linguistically diverse. More than 30% of Austin’s population speaks a language other than English. If you want to hear some Spanish take a stroll along Cesar Chavez Street.

A mile high and 150,000 multilingual residents deep, Denver can claim a language culture as unique as its geographical location. Immigrants from across Latin America make up its multilingual population, and Denver holds the largest Cinco de Mayo celebration in the U.S.

El Paso, know as “El Chuco” by residents, has the largest percentage of foreign language speakers of any city on this list. More than 70% of El Paso is multilingual. El Paso shares four bridges with Ciudad Juarez in Chihuahua, Mexico, allowing the two cities to act together as an international metropolitan area.

Since its inception as a city, Philadelphia has had links to foreign languages. Named the City of Brotherly Love from the Greek words philos and adelphos, Philadelphia has more than 250,000 multilingual residents. Visit the Italian Market to hear a variety of different languages from Italian, to Korean, Spanish, and Vietnamese.

Only about 20 miles south of downtown Los Angeles, Long Beach has more than 200,000 multilingual residents. If you want to hear some Khmer, take a trip to Cambodia Town, the largest Cambodian community in the nation.

The following is a list of the remaining 25 cities we ranked:

A Note About ALTA’s Scoring System:

In order to compensate for the population differences between cities and ensure fair score distribution, we factored per capita statistics into each city’s score. For example, New York City has more foreign language media outlets than Albuquerque, but New York also has a much larger population of foreign language speakers, giving it an unfair advantage in that category. So, we divided the number of multilingual persons in a city by the number of foreign language media outlets in that city. Per capita calculations were used when dealing with non-census cultural data. Some cities with very high percentages of multilingual residents did not make it past our initial round of data collection due to their population numbers. The city of Miami, for instance, had only 362,470 residents when the 2000 census was done. Had the population exceeded our 400,000 cut-off mark, Miami would surely have placed somewhere near the top cities as 74.6% of its residents are multilingual.

Even as you read this, the U.S. Census Bureau is busy compiling data for the 2010 Census. Population data will have significantly changed in many of these places over the course of the past decade. We will make sure to provide an updated ranking as soon as the data is made available!