Trying to Build a Tower That Reaches Heaven: Interview with Translator Michael Kandel

Posted by Maria Khodorkovsky in Language and Culture, Translation on July 14, 2015 3 Comments 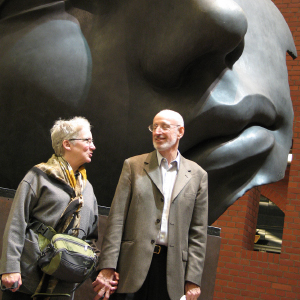 Michael Kandel’s humility borders on self-deprecation. The leading English-language translator of Polish science fiction writer Stanislaw Lem sees the translator’s lot as utilitarian, unromantic, invisible. His mantra is that failure is inevitable. And yet, the scope and significance of Kandel’s work would have a brasher personality gobbling up laurels – and well deserved ones, at that.

I think of a translator as a person who works offstage, behind the curtain – moving scenery, making sure the props are where they ought to be. The audience applauds the actor, the playwright, maybe the director, but surely not the stagehand. The purpose of translating is to have readers exclaim, “What a wonderful author!” not, “What a wonderful translator!”

Michael Kandel’s translations of The Cyberiad (1974), His Master’s Voice (1983), and Fiasco (1987), among other works, contribute to the more than 30 million copies of Lem’s books that have been sold worldwide. What began as a doctoral student’s fan letter to a beloved author developed, over the course of two decades, into a working relationship between Lem and Kandel that would introduce a generation of readers to the darkly imaginative worlds of interstellar explorer Ijon Tichy, the indefatigable constructors Trurl and Klapaucius, and scores of fantastical creations that hold a mirror to society.

In this interview, Michael Kandel speaks with ALTA Language Services about the triumphs and frustrations of translating literary works. Embedded in the text are excerpts from Kandel’s lecture at the Transnational Literature and Translation Conference, which took place at Swarthmore College earlier this year.

How did you get your start as a translator and writer of science fiction? Were there any pivotal moments that led you to the profession or genre you work in?

At first it was a reflex, which I’ve seen in many other people: you find something beautiful or clever or moving in another language and want to show it to people who don’t know that language. I sent Lem a letter in the spirit of fan mail. I think I also sent him a copy of an essay I wrote about him and cybernetics. He responded with the request that I fix an English translation of his Memoirs Found in a Bathtub for McGraw-Hill. After that, the publisher (Seabury, Continuum, Harcourt) began asking me to suggest Lem books to publish, and I became an official translator.

Science fiction I loved as a kid and then growing up and then growing old. I never thought of myself as a writer, but the praise for my translations made me think that maybe I was after all.

Stanislaw Lem’s style of writing is famously rich with wordplay, puns, and unconventional language. What are the most difficult aspects of translating that kind of work? And what are some of the easiest, if in fact there are any?

The wordplay is actually easy: fancy footwork, and of course the audience applauds. The most difficult aspect of translating Lem, I think, is to preserve the wit and energy of his essays (e.g., his Summa), which is sort of British 19th-centuryish philosophical and doesn’t survive the repotting in American modern soil.

Simple mistakes, and sometimes they can be howlers, happen to the best translators…. [A fellow translator] translated the Polish for the term “Brownian motion,” the random motion of particles in a liquid or gas, named after the botanist Robert Brown, as “brown movements.”

One of my favorite lines in your translation of The Cyberiad comes from the second sally, where the bewildered king attempts to destroy a mechanical adversary, only to find “the thing was twinned instead of twained”. What are some of your proudest translation moments – uncanny turns of phrase, hard-won successes, and “aha!” moments?

I used analogues a lot. So, for example, in a story where the inhabitants of a planet speak in medieval Polish, I went through Chaucer for things like ywis. A proud moment: In Krakow once I was complimented on catching a joke in The Cyberiad: a warrior cries “Awruk” when he attacks. Awruk backward is kurwa, which is what a Pole says when he hits his thumb with a hammer – I heard that curse not so long ago in Chinatown, from a man working on a road repair. Literally, it’s “whore,” but the sense is extremely rude in the vein of “fuck.” The complimenter, a Ukrainian, told me that all the other translators missed that. (The translation said, “Tikcuf!”)

I buy and endorse the concept of functional equivalence: that the goal should be to communicate the result, not the cause; convey the spirit, not the letter. If a work is funny, let its translation be funny. Explaining a joke either by adding words in text or by using a footnote may enlighten students, readers, about a time and place, but humor does not survive vivisection.

Has your approach to translation changed over the years?

I’ve become less confident. I feel that the prose often is lifeless and flatfooted. Ditto with my own writing.

I also had the unusual experience of seeing my own prose, both fiction and nonfiction, in translation, a few in a language that I could actually read. It was flattering, of course, but also disorienting. I encountered a different author each time. Kandel in Polish, for example, sounds more confident than Kandel in English.

One of the cardinal rules of translation is “You can’t translate what you don’t understand.” It’s easy to see how that applies to straightforward texts, but what does that mean for translating fiction? How well do you feel you need to understand the author’s philosophy to do your job well?

I agree with that rule and could give many examples of a translation that failed because the translator didn’t understand what the author was doing. I believe that a translator has to understand not only intellectually but also viscerally – wavelengthly.

In an interview with Restless Books, you stated: “Translators…are going to fail. No matter what you do, you’re not going to succeed. People may like what you do, but they like something else that isn’t exactly what you really set out to do.” Can you elaborate on that?

The original Lem is so much better, worlds better, than Lem in Kandel’s English. This is our punishment for trying to build a tower that reaches heaven.

…yet my feeling is that, for both writers and translators, there are no rules, at best only rules of thumb.

ALTA Language Services is an industry leader in translation services for businesses, government agencies, and non-profit organizations worldwide. Our Translation Quality Management System is ISO 9001:2008 certified, and there are 2500+ professional linguists and 30 years of experience behind our work.