Posted by Maria Khodorkovsky in Etymology on September 22, 2009 2 Comments 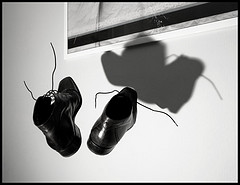 You may be surprised to learn how many of the words we use have unusual origins. Having spent centuries in our lexicons, these words have lost their original significations and now take on colloquial meanings. To get back to our roots, let’s examine three common words.

Sabotage
The 20th-century French verb saboter, meaning to accidently or maliciously destroy, stems from an older French word, sabot, meaning “old shoe.” These old shoes were made of wood, and so made walking softly or stealthily quite difficult. To sabotage originally meant to walk noisily; later it came to mean to do something poorly, to make a mess, or to bungle something. Thus, the contemporary understanding of sabotage – to hinder, destroy, tamper with, or obscure – stems from the inability to be courteous while wearing sabots.

Maroon
Maroon as a color stems from the Greek maraon, meaning “chestnut.” Because of their rich hue, chestnuts came to be representative of the color brown and were incorporated into the Old French to mean both the color and the nut. Later, in the early 17th century, the term was used to refer to fugitive slaves in the West Indies and Dutch Guyana – both due to skin color and to the fact that those who were able to escape lived in cimarron, Spanish for a wild forest or thicket. This secondary meaning gives us the contemporary understanding of the verb “to maroon.”

Mystery
The etymology of this word is intricately intertwined with the history of theology. The ancient Greeks referred to their religious rites and doctrines as mysteria and to the people initiated into them as mystes. The root of this word, perhaps, was the verb myein, meaning to close or shut (implying that initiates were sworn to secrecy about the rites they witnessed and performed). The term found its way into the Old French via Latin, and in the early 14th century became widely used in English to mean a religious truth, divine revelation, or the mystical presence of God. This religious usage led to the secular understanding of a mystery as something unclear and difficult to grasp.