Why Don’t Americans Have British Accents? 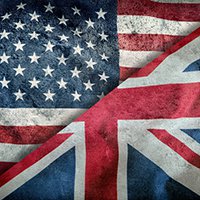 Anyone who has seen a Shakespearean play or historical drama is probably familiar with the differences between American and British accents. The British accent seems so formal and historical, while the American accent can seem like a casual upstart in comparison. So how did the United States shift away from the traditional British accent in the first place?

The truth isn’t so simple. In fact, we can’t say that the United States ever truly abandoned the original British accent, because the British accent from hundreds of years ago is significantly different than that of today’s. There are several key factors to consider when discussing the divergence between British and American accents.

Languages and accents are not static. In fact, they change constantly. Any language and/or accent can be especially impacted by factors like isolation and exposure to other languages.

The Role of Rhoticity

Rhoticity is one of the main differentiations between standard American and British accents. While there are regional exceptions, American accents are often rhotic, meaning the letter “r” is pronounced. However, British accents are often non-rhotic, which means speakers may drop the letter “r” as long as it isn’t at the beginning of the word (such as rope) or following a consonant (such as break). Think of the words “car” and “mother” in both accents and you can see the difference in action.

But Americans didn’t just decide to start pronouncing “r” suddenly. In fact, in the 1600s, the British usually pronounced the letter, too. Non-rhoticity spread through the British Isles over time, and many British immigrants arrived in the United States before non-rhoticity hit their homelands.

So, while Americans of British descent continued to pronounce the letter “r,” the accents of British citizens evolved to drop the letter.

The pronunciation of some instances of the letter “a” also evolved in the British Isles.

Opinions are mixed, but it is safe to say that when it comes to the pronunciation of “r” and “a,” American accents may have more in common with historical British accents than do modern British accents.

However, it is also important to remember that American accents constantly change, too, and regional variations abound.

Both British and American accents are constantly evolving. Rather than trying to determine how, when, or why American accents diverged from British accents, it is perhaps more accurate to view each accent as taking a separate path towards change as soon as colonists left the British Isles.