Why Do We Associate the Word Like with Stupidity, and Why Are We Wrong?

Posted by Janet Barrow in Language Training on September 6, 2018 1 Comment 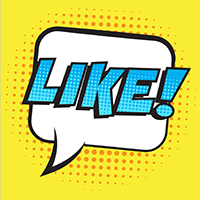 A: “Yesterday was, like, the worst day of my life. I got home from work around five-thirty and I was, like, so hungry so I went to the fridge to make a sandwich but when I opened the door there was, like, a whole family of mice inside! I, like, died when I saw them.”
B: “Ew, that’s like so gross!”
A: “Yeah, and the worst part is that when I told my wife she was like, ‘well, it’s your fault for always leaving food out on the table.'”
Written down, the above conversation is infuriating. Spoken out loud, though, it’s not too different from the way that people talk to each other every day. So what is it about the word like that gets under people’s skin, and is it possible we’re not giving the word as much credit as it deserves?

The word like comes from the Old English word ‘gelic,’ which meant, ‘with the body of,’ and was essentially a way of saying ‘similar to.’ For example, something that was giraffe-like would be something ‘with the body of a giraffe’ – namely, something tall and therefore ‘similar to a giraffe.’ Over time, ‘gelic’ shortened to ‘lic,’ which eventually took on its modern form, ‘like.’ Like was then used for a long time as a sort of adjective add-on, meaning that you could slap it behind an adjective, as in slow-like, strange-like, or angry-like, and it gave whatever you were describing the quality of that adjective. Though this formulation can still occasionally be found in colloquial modern English, the like add-on eventually modified into its own suffix: -ly. So now, instead of saying slow-like, strange-like, or angry-like, we say slowly, strangely, and angrily.

Because we tend to relate like to its historical definition – similar to – young people’s frequent use of the word can easily begin to look like overkill. Is it really necessary, after all, to say that something is like another thing instead of just saying what something is? Those who constantly use comparisons and approximations, some might reason, must do so because they are afraid of speaking definitively, either because they lack confidence or because they lack intelligence. Or maybe they’re using the word as a constant filler: a signal that they need more time to formulate a thought as they go, similar to words like “uh” and “um,” because they can’t think quickly on their feet. But since the word like is a common feature of the language for most young people, does that mean that they’re all harboring some sort of mysteriously potent inferiority complex? Before we start making sweeping generalizations about half of the American population, might it not make a little more sense to examine the way like itself has evolved over the past few years?

In reality, like is one of the most complex and versatile words in the English language. It can be used as a noun, verb, preposition, adjective, conjunction, adverb, hedge, intensifier, quotative, and finally, as a filler.
The first six uses listed are not quite as modern as the following four and therefore tend to be more widely recognized as the kinds of likes that don’t ‘grate the ears.’ We have:

Already used in such a wide variety of ways, it isn’t all that surprising that modern English has continued to diversify the uses of like. Let’s look back at the example from the beginning.

In the first sentence, like presents as a hedge. A hedge is a mitigating word, meaning that it is used to lessen the impact of the utterance to follow. This is the way that most people tend to think of like: as a softener or an approximator. The reality, though, is that most of the time when like is used as a hedge it’s done so intentionally, as a way of being polite, especially when delivering negative news. If you invite someone to a party, for example, and they respond, “Sorry, I’m tired,” it sounds harsher than if they say, “Sorry, I’m just like really tired.” This is true because the like here acknowledges the discomfort in the situation and softens the blow to come.

Similarly, like as a hedge can be used to suggest that what follows is an exaggeration, as in the sentence, “Yesterday was, like, the worst day of my life.” The use of like here indicates to us that yesterday was not actually the worst day of Speaker A’s life because it softens the phrase that follows by marking it as exaggeration. In fact, without the word like here, the sentence would be taken at face value, and Speaker B would probably expect Speaker A to elaborate about a death in the family or coming home to a burnt down house rather than going on to tell a humorous anecdote.

The final sentence of this paragraph, “I, like, died when I saw them,” is also a hedge, this time showing that the phrase that follows is to be taken metaphorically or as hyperbole – the speaker, of course, did not actually die upon seeing the mice.

In Speaker A’s second sentence, the problem with the theory of like as a symptom of youthful hesitancy is really brought out into the light. After all, Speaker A seems to be telling a story with zeal and vividness, not hesitation. The like in “I was, like, so hungry,” isn’t there to show approximation or uncertainty, but rather to intensify and underline the speakers point: in other words, Speaker A was really, really hungry. Speaker B’s response mirrors Speaker A’s usage with another intensifying like. Again, “that’s, like, so gross,” could be rewritten as “that’s extremely gross.”

Jumping back to when Speaker A says, “there was, like, a whole family of mice inside,” like as intensifier takes on even greater complexity. Here, the speaker is not only underlining the utterance to follow, but also acknowledging the speaker’s counter-expectation. It’s as if, just by inserting one little word, Speaker A is now saying, “there was, contrary to what you might believe because it’s so shocking, a whole family of mice inside.”

In the last sentence, Speaker A uses like as a quotative to introduce a quotation. Though some people might object to this usage, suggesting Speaker A should have said, “when I told my wife, she said,” rather than, “when I told my wife, she was like,” the quotative like here is more accurate, because it implicitly acknowledges that what follows is not an exact quote, but rather an approximation of what was said.

Notice I didn’t provide an example of the last use of like – a filler – from the above conversation. That’s because even though to a casual observer they all might have looked like fillers, none were. So, what can we conclude from all of this? I’d say the most obvious takeaway is that like, contrary to popular belief, is a complex and rich word representative of the incredible range of nuance that is accessible to us in modern English. Far from exposing its users as unintelligent, overly self-conscious, or slow to formulate thoughts, one could argue that it shows them to be masters of the English language, capable of intuitively producing like in all its varied permutations while seamlessly digesting and responding to its diverse effects on meaning and tone.