Posted by Jes Gearing in Language and Culture on May 26, 2010 0 Comments 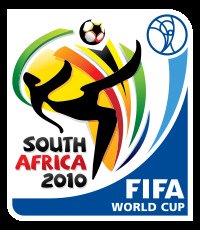 The 2010 FIFA World Cup is just around the corner, starting June 11 and ending July 11. Beyond the hype over which team is favored to win (it seems that almost everyone has a different prediction—Spain, England, Brazil—), it is impossible not to recognize the congregation of languages that will occur during that one month. Like the Olympics, the World Cup brings extremely diverse countries together (thirty-two in total for the games, tens more, of course, as spectators) and facilitates the friendly, if not heated, competition between them. With thirty-two countries represented, eighteen official languages are shared from English to Spanish to Korean, but tens of various dialects enter the mix as well: Riverense Portuñol spoken in Uruguay or Algerian Arabic spoken, obviously, in Algeria.

In addition to the languages spoken by the teams and spectators, the languages of the host country also require special consideration. This year’s World Cup is being hosted by South Africa, a country that recognizes eleven official languages in its constitution and is home to a host of other dialects as well. The eleven official languages are as follows: Afrikaans, English, IsiNdebele, IsiXhosa, IsiZulu, Northern Sotho, Sesotho, Setswana, SiSwati, Tshivenda, and Xitsonga. Other languages spoken in South Africa and mentioned in the constitution, though not official, include Kho, Nama, San, sign language, Arabic, German, Greek, Gujarati, Hebrew, Hindi, Portuguese, Sanskrit, Tamil, Telegu, and Urdu. The indigenous creoles and pidgins like Tsotsi taal and Fanagalo vary the language mix even more. While these languages are not recognized or considered in the constitution, they are used by various language groups to communicate in the urban environment.

In today’s global economy, it is easy to assume that English would be the lingua franca of South Africa—a globally common language that would enable a linguistically diverse population to communicate. While English is popular, representing a total of 8.2% of the population (according to the dated 2001 census), it lags behind IsiZulu (23.8%), IsiXhosa (17.6%), Afrikaans (13.3%), and Northern Sotho (9.4%). Setswana actually ties with English at 8.2%. English might be used for business communication, but, as the fifth most popular language, it obviously doesn’t hold a prominent position compared to South Africa’s more indigenous and other colonized tongues.

Given the diversity and distribution of languages in the country, it is useful to consider the four most popular South African languages ahead of English, especially in regards to the World Cup. Different Cup matches will take place in stadiums across the country—Bloemfontein, Cape Town, Durban, Johannesburg, Kimberley, Nelspruit, Orkney, Polokwane, Port Elizabeth, Pretoria, and Rustenburg. These cities are located all over South Africa and since the country’s official languages tend to be centered in specific geographic locations, a brief history and explanation of the languages help ground the matches in their cultural-linguistic spaces.

IsiZulu, the most popular language in South Africa, is the language of the Zulu people, South Africa’s largest ethnic group. It is a tonal language and is grouped in the Nguni language group along with IsiXhosa, SiSwati, and IsiNdebele. While the language is spoken across the country, it is most concentrated in the province of KwaZulu-Natal. A spoken language until the mid-nineteenth century, the written language developed after Christian missionaries first translated the Bible into IsiZulu in 1883. The first work of IsiZulu literature translated was Thomas Mofolo’s Chaka, which appeared in 1910 and was published in 1925.

IsiXhosa, also known as Southern or Cape Nguni, is closely related to IsiZulu, but in distribution is concentrated mostly in the former Transkei, Ciskei and Eastern Cape regions. Like IsiZulu, it is a tonal language, and it is a language in which various click sounds represent consonants. The noun is the primary part of speech in IsiXhosa. For the written language, the Latin alphabet is used as a result of missionary influence, and the first IsiXhosa Bible was produced in 1859. While the language used in universities is usually English or Afrikaans, Xhosa is often taught as a subject. Literature, radio, TV, plays, and the like, are produced in IsiXhosa.

The third most prominent language, Afrikaans, is arguably the most generally recognized language in South Africa. A language originating from seventeenth century Dutch settlement, Afrikaans can be simply described as a combination of English, Malay, German, Portuguese, French, and some African languages. A distinct language from Dutch, it is still possible for Afrikaans and Dutch language speakers to understand each other. The Afrikaans vocabulary is Dutch, and the language’s grammar is like a simpler version of Dutch grammar. The earliest texts of Afrikaans are attributed to “doggeral verse” from 1795 and a dialogue transcribed by a Dutch traveler in 1825. The first authoritative text, however, is considered to be L.H. Meurant’s Zamenspraak tusschen Klaas Waarzegger en Jan Twyfelaar (“Conversation between Claus Truthsayer and John Doubter“) which was published in 1861.

The fourth most popular language is Northern Sotho, otherwise known as Sotho or Sesotho sa Leboa (the autoglottonym used by the United Nations). Northern Sotho is often referred to as Sepedi (as it was originally designated in the constitution), but it has since been designated as Northern Sotho in an attempt to recognize the thirty closely related dialects the language represents instead of the one Pedi dialect. Historically, Northern Sotho has been associated with Pedi because the original missionaries had contact with the Pedi people, but various non-Pedi dialects are also encompassed in the language.

The other official and unofficial South African languages, combined with the official World Cup languages, and all the other spoken languages Cup fans will be able to hear in the street in South Africa, will undoubtedly make this World Cup a celebration of linguistic diversity. With the matches broadcast all over the world, it is impossible to discern the total languages and dialects that will be represented by the month long event—it’s all enough to make a language lover scream “GOAAAAAL!”