10 Most Influential Languages in the World

Posted by Hannah in Language and Culture, Most Popular on June 5, 2008 10 Comments 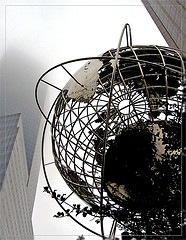 Back in the ’90s, the magazine Language Today published an article by George Weber that analyzed the world’s most influential languages. It was an interesting analysis, because it accounted for “influence” of a language in a number of ways.

For example, Chinese has the most speakers in the world, but it ranks 6 on the list. The formula also takes into account the number of secondary speakers of a language (of which Chinese, a relatively complex language, has few), as well as other factors, such as the economic power of countries that use the language.

The article also highlights the societal differences that have influenced these rankings. Weber argues that French is one of the most aggressively promoted languages in the world, and its knowledge often carries a certain prestige (though less so now that English has become the more frequent common denominator in an international setting).

Chinese and Japanese, conversely, are not very common as second languages, due both to the complexity of the language as well as the attitudes of the Chinese and Japanese people. The article states “Chinese is a language whose speakers are noticeably disinterested in spreading its use outside their own people; Not unlike the Japanese, the Chinese prefer to deal with foreigners in English.”

For more information, you can view Weber’s article here.

Being a native English speaker, it’s difficult to look at this list without personal bias, but English’s top spot rings true to me. At ALTA, we work with translators all over the world, and it seems to me that English is most often the common denominator. If a client requests we translate Finnish into Brazilian Portuguese, it’s going to be difficult to find a linguist who is fluent in both of those languages, regardless of where in the world we look. Instead, it’s more likely we would translate from Finnish into English, and from English into Brazilian Portuguese. In our corner of the world, though, French carries far less importance than Spanish. Seeing it ranked 3rd may come as a surprise to anyone living in the United States.

According to the 15th edition of Ethnologue, the top 10 most common languages (primary speakers) in the world are:

What’s interesting is the fact that French appears no where on this list (it ranks at 17), but due to its massive number of secondary speakers, it appears as the 2nd most influential in Weber’s article. And Bengali doesn’t even show up in the top 10 most influential languages.

Still, “influential” is a term that carries a lot of subjectivity, not to mention the difficulty of accurately establishing the number of secondary speakers a language has, as well as documenting the prestige a language’s knowledge carries. Anyone out there feeling snubbed by Weber’s assessment?