7 Questions to a Linguist: John McWhorter Scales the “Mt. Everest” of Russian

Posted by Maria Khodorkovsky in Language and Culture on October 9, 2015 0 Comments 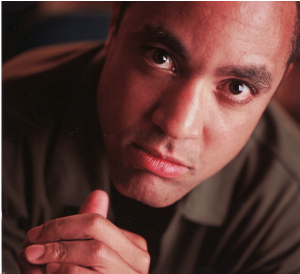 In today’s 7 Questions to a Linguist, we hear from one of the language field’s most intriguing cultural commentators: author, linguist, and Columbia professor Dr. John McWhorter. A staple of media discussions surrounding the changing face of race relations, McWhorter has appeared on CNN Tonight, Meet the Press, The O’Reilly Factor, The Colbert Report, and NPR’s Fresh Air.

In his research as much as in his politics, McWhorter embraces the evolutionary dynamism of the language we speak and its complex relationship to our perception of self and other. Here he discusses what happens when a language “starts again”, the pleasures and perils of difficult languages, and the touchy subject of race in phonology.

One night during my first year of graduate school I was reading Derek Bickerton’s Roots of Language, and learned about creole languages such as Haitian, Jamaican patois, and Papiamentu. I had never known of such languages, or of the fact that a process of hybridization and simplification has created new languages like those worldwide. That was the beginning of my interest in what happens when language “starts again”.

Later on, a colleague and friend enlightened me to the fact that among Indo-European languages, the norm is the rich suffixation and complexity of a language like Russian, Greek, or Lithuanian. It’s the more streamlined languages like English, French and Swedish that are the oddities, and they became the way they are because there was a point when adults learned them in such large numbers that they came out less baroquely complicated than a language normally is. That insight has guided a lot of my research since.

Then, these days I am trying to teach myself Mandarin, and I am just wallowing in finally getting a feel of the inner workings of a language that isn’t all about prefixes and suffixes and isn’t related at all to European languages.

What I am most interested in these days is demonstrating that when languages are oddly “streamlined” compared to their relatives, the reason is adult acquisition in the past. Many linguists have thought that a language can just become massively less complex than it once was by chance, but I question that, given that languages like Russian have never done such a thing. So I am doing studies of cases worldwide and seeing if I can apply my hypothesis to the entire world.

I am also studying Black English phonology – specifically I want to address a question surprisingly untouched by the specialists: how is it that you can usually tell a person is “black” from their voice even when they are speaking Standard English? These things are quite different from my days of studying how creole languages emerged – I now see creoles as just an extreme manifestation of a general process.

I have always taught myself languages as a hobby for no real reason. I have learned from Michael Erard’s wonderful Babel No More that there are other people like me and that we are a bit sick. One language that I failed to ever really crack was Japanese, simply because it seemed that mastering the writing system would be so difficult that it wasn’t worth trying if I wasn’t doing it for any real reason. But these days I am climbing that mountain again with Mandarin and finding that with some quiet, semi-obsessive dedication, learning to read on the level of a child isn’t impossible. It is definitely an illness to cherish getting only that far at something!

The truth is that the language I feel like I will never truly master despite it being my favorite Mt. Everest is Russian. It is clear to me that with all of the exceptions to every rule, and especially the verbs of motion, the only way to actually know the language is to live in it, and I don’t see my life going in that direction any time soon, if ever. So I am content with reading it – but Russian took me longer even for reading than any language I have ever dealt with (other than Japanese).

4. Which moments have frustrated you the most throughout your career?

In my career as a linguist what has frustrated me the most is an advocational strain among linguists studying creoles. Tacitly most creole specialists feel a commitment not only to science, but to demonstrating that creoles are “real” languages rather than somehow unsuitable.

This is an important mission, but it means that probably most creolists viscerally reject any idea that a creole is “less complex” than an ancient language. Of course, creoles are complex as all languages are. However, the simple fact is that a language like Russian is more complex than creoles, period. I think creoles’ status as languages that “started again” is one of the things that makes them interesting, but most creolists insist that technically, creoles aren’t a kind of language at all.

The warmest reception I can expect from most other creole specialists is that I am “provocative” – which is a nice way of saying “wrong”!

5. Historically, what do you see as two or three of the biggest events that have shaped the development of human language?

The first major event that shaped language was when humans split into more than one group, because that was the beginning of there being more than one language. The next major development was writing, because in representing language sitting static on a page, it encouraged a sense that language is not supposed to change, or that unchanged language is “real” language.

Thus began people speaking something often vastly different from what would be written down, with that written version of the language also being what one speaks in formal situations. That isn’t the way language works among, for example, hunter-gatherers. Then, there was the development of technology that allowed rapid, large-scale population movements. This led to languages being learned by massive numbers of adult newcomers, and therefore to unusually “streamlined” languages. Slavery is the version of this that created many creoles; meanwhile other population movements created English, Mandarin Chinese, and other languages.

One of the most awkward things I have encountered in my experiences as a linguist is that humans’ sense of vernacular varieties that they speak can be so different from a linguist’s. A Sinhalese speaker may think they don’t speak the “real” language because Literary Sinhalese, practically a different language, occupies pride of place in the culture. The linguist thinks of Jamaican patois as a fascinating alternate system; many of its own speakers consider it just bad English, and can be, therefore, touchy about being asked “What are you speaking?” (as I naively did in college once). Or, when Black English made the news in the late 90s during a controversy over its possible use in classrooms, I was struck to find out that a great many black Americans are not aware that they speak an alternate dialect to Standard English, as opposed to just using a few slang words and expressions.

All of this is understandable, but it means one must learn to negotiate the issues carefully and be always aware that everybody isn’t in your head. For example, many black Americans bristle at the idea that there is a “black” way of sounding, and yet are very quick to notice that a black person “doesn’t sound black.” All very tricky sometimes.

I seem to have attracted a flurry of controversy a couple of years ago – for some reason mostly in Europe – when I was quoted in a Slate piece, I think, as saying that some uses of the comma are arbitrary and unnecessary. I stand my ground – the Oxford comma is utterly unnecessary. It has a certain aesthetic appeal but if it had never been invented no one would miss it, and if life could be started over before the Oxford comma existed, it would quite likely not be invented on the second go-round. It doesn’t hurt anything, any more than bowties, which the Oxford comma is precisely as useful as.