Dancing over dueling: How English metaphors make arguments a matter of war

Posted by Kate Dzubinski in Etymology on August 27, 2019 1 Comment 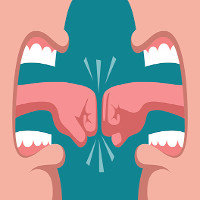 In our last post on metaphors, we discovered that much of our daily language contains metaphors we’re unaware of – like spending time or falling into a coma. In this post, we are going to explore war metaphors as applied to debates and arguments.

Metaphors can deeply shape our thinking, a core idea of George Lakoff and Mark Johnson’s book, Metaphors We Live By, one of the founding works in cognitive linguistics. In English, arguments are understood and talked about as war: argument is war. For example, you can take a position, defend a position, your point can be attacked, you can have different strategies, and win or lose an argument. But Lakoff and Johnson imagine what might change if there were a society where instead of war, argument is structured as a dance:

…the participants are seen as performers, and the goal is to perform in a balanced and aesthetically pleasing way. In such a culture, people would view arguments differently, experience them differently, carry them out differently, and talk about them differently. But we would probably not view them as arguing at all: they would simply be doing something different. It would seem strange even to call what they were doing “arguing.” Perhaps the most neutral way of describing this difference between their culture and ours would be to say that we have a discourse form structured in terms of battle and they have one structured in terms of dance.

Clearly this is an extreme example, and to my knowledge and that of the authors’, no such society exists. Still, as we have seen, metaphors do vary across languages, and “we act according to how we conceive of things”. In other words, when we link an abstract idea, like an argument, to a concrete one, like a physical battle, our understanding of the abstract idea is affected by what we know about the concrete one.

Metaphors, Lakoff and Johnson say, highlight certain parts of our experience and hide others. War highlights competition but hides the possibility of an argument where the goal of both participants is to come to an agreement.

In her book The Dance of Anger, Dr. Harriet Lerner gives us a window into what we might gain from argument as dance as a metaphor. The aim of Lerner’s book is to help people improve their intimate relationships by changing their steps in patterns of anger and argument with their loved ones. In the context of these relationships (between spouses, parents, and children), war with its winner and loser, with the idea of wounds and casualties becomes counterproductive, because the goal is relational harmony: closeness rather than domination.

Argument as war also hides the repetitive, unproductive nature of arguments we have with loved ones. So instead, Lerner uses argument as dance to highlight those patterns, where, much like in dancing, there are certain steps both partners perform that reaffirm the relationship’s status-quo: when one person steps forward, the other knows to step back. Lerner uses argument as dance to great effect as she discusses how changing our steps can bring lasting change to those repetitive patterns, while maintaining the closeness of the intimate relationship.

Hopefully, exploring some of how metaphors work themselves out in the context of real people’s lived experiences will help you notice your own metaphors in your own day-to-day language. Pay attention. When you notice a metaphor, ask yourself – what does this metaphor highlight? What does it hide? Is there another metaphor that could help me here in some way?

Kate Dzubinski is a Certified Medical Interpreter whose background draws from the southern US, Austria, and northeastern Spain. She grew up speaking four languages, and currently works as a hospital interpreter, continuing education developer and lead facilitator in the Interpreter Training department at ALTA Language Services.