Etymology of the Cosmos

Posted by Maria Khodorkovsky in Etymology on August 25, 2017 0 Comments 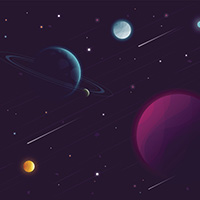 The cosmos that surrounds our planet is a vast playground of knowledge – for astronomers, for physicists, for theologians, and even for experienced linguists.  Below you will find the word origins of some of the most mesmerizing celestial bodies found in outer space.

Cosmos: In usage since ancient times, this word of Greek origin originally meant “order” and “arrangement.”  From this broad category, we derive the Russian cosmonaut, literally meaning “space sailor”, as well as the word cosmetic, with its echoes of orderly arrangement and adornment.

Asteroid: These millions of small Solar System bodies derive their name from the Greek aster, meaning “star”, and the suffix –eidos, denoting an object that is similar to another.  Thus, asteroids are considered “star-like” bodies orbiting the sun.

Comet: These frigid bodies are remarkable for their long, brilliant tails, visible when a comet approaches the sun.  For this feature, the ancient Greeks termed them kometes, meaning “long-haired.”

Meteor: These “shooting stars” are called meteoroids when they enter the Earth’s atmosphere and meteorites if they reach the ground and survive impact.  The visible streak that they make across the sky is referred to as a meteor, from the Greek meta, meaning “over” and aoros, meaning “lifted” or “in the air.”

Planet: Immense enough to be rounded out by their own gravity, planets derive their etymology from the Greek asteres planetai, meaning “wandering stars.”  The root planasthai, meaning “to wander” was central to the ancient understanding of planets as celestial bodies that do not remain fixed in one spot in the skies.

Cloud: Interstellar clouds found throughout numerous galaxies, including ours, are composed of hydrogen, plasma, and dust.  Both the clouds of outer space and those hovering in our atmosphere derive their etymology from the Old English clud, meaning a “mass of rock,” and share their origins with the word “clod.”  Interestingly enough, the phrase “to be on Cloud Nine” may have been taken from the International Cloud-Atlas, published in 1895, which outlines ten cloud types.  In it, soft, puffy cumulonimbus clouds were number nine on the list, and perhaps were presumed to be a cushy and comfortable location to find oneself.