Posted by Maria Khodorkovsky in Interpreting on June 14, 2017 0 Comments 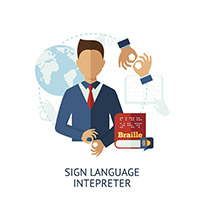 While ad hoc versions of sign language have existed throughout the course of human civilization, it was not until the 17th century that the Western world saw a systematic study of the teaching and learning of sign language.  In 1620, a Spanish priest by the name of Juan Pablo Bonet published the first modern text to propose a method of educating deaf children through the use of manual signs.  His Reducción de las letras y arte para enseñar a hablar a los mudos (Summary of the Letters and Art of Teaching Speech to the Mute) paved the way for another philanthropic educator, Abbé Charles-Michel de l’Epée, who in 1755 founded the first public school for the deaf.  Known as the “Father of the Deaf” for his extensive work with sign language, Abbé de l’Epée gleaned much of his teachings from his observations of deaf people on the streets of Paris.  Synthesizing this information with typical gestures and hand signs, he was able to publish a manual alphabet that was used, mostly unchanged, until the present.

Modern American Sign Language is derived from the continental system created in the 18th century, but it also has its own unique history.  American minister Thomas Hopkins Gallaudet was a prominent figure in the education of the deaf, traveling to France in 1815 to study methods of communication.  In 1817, upon his return to the United States, Gallaudet founded the country’s first school for the deaf, in Hartford, Connecticut.  By 1863, there were a total of 22 functioning schools throughout the nation, and by 1864, a college dedicated to the education of deaf people.  Prior to that, in the 17th century, the United States was the birthplace of Martha’s Vineyard Sign Language.  That area of the country was home to a large deaf population; by 1854, the percentage of deaf people on the island was almost 35 times higher than the national average.  For this reason, a specialized sign language had been worked out in the area before it had spread to other parts of the country.

Today, a number of organizations exist dedicated to the education and advancement of the deaf, as well as institutions that increase awareness of and offer lessons in American Sign Language.  For more information, visit the website of a local chapter of the American Sign Language Association.