Shemps, MacGuffins, and Alan Smithee: 10 Movie Terms You’ve Just Got to Read About

Posted by Maria Khodorkovsky in Language and Film & Music on August 10, 2016 0 Comments 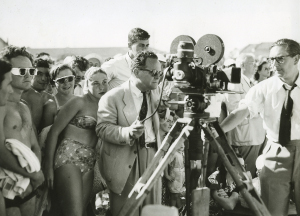 What happens when you combine lush greenery, a low cost of doing business, and a bevy of targeted tax incentives? You get a booming film industry that made a statewide economic impact of $6 billion in 2015, for one.

It’s official: Georgia has become the 3rd-largest U.S. state for making movies. Last year alone we hosted 248 films and TV shows, including the blockbuster Ant-Man, the latest installment of The Hunger Games, and the zombie favorite The Walking Dead.

As production crews flock to our hometown, we thought to brush up on some of the more intriguing terms used in the film industry. The phrases may be familiar, but their origin stories are anything but!

Let’s start with a phrase so well-known that it’s used in everyday speech nearly as often as in the movie business. To “wrap” or “wrap up” is to finish a project and is actually an acronym dating back to the 1920s. It stands for “Wind, Reel, and Print”.

This term refers to the second-to-last shot of the day. Its namesake is a production manager famous for letting the crew know to be ready for “this shot and just one more”. Oftentimes the director had other ideas, so the term has a bit of a sardonic ring to it.

The final take of the day also has a nickname: martini shot. The next “shot” for the exhausted film crew will be in a martini glass.

A grindhouse is a theater that specializes in showing schmaltzy, racy, gory, or just plain bizarre movies. Starting in the first half of the 20th century, certain theaters made their profits by “grinding out” as many movies as could possibly fit in a day’s schedule. Naturally, these were not the most intellectually rigorous productions, and eventually they became associated with the seedier parts of town. That’s when the term “grindhouse” acquired a second layer of meaning as a theater where striptease and “bump ‘n’ grind” movies could be enjoyed.

When a director is so displeased with the slicing and dicing his movie suffered – or if it was a simple money-making endeavor to begin with – he can save face under the pseudonym Alan (or Allen) Smithee. First used in the 1969 release of the film Death of a Gunfighter, the fictional name grew out of “Al Smith”, which was tinkered with to avoid mix-ups with real Al Smiths working in the industry.

Westerns hold a warm and nostalgic place in U.S. cinematic history, but their “spaghetti western” counterpart comes courtesy of the string of films made by Italian director Sergio Leone and scored by composer Ennio Morricone. Perhaps the most famous example is the Dollars Trilogy, which consists of A Fistful of Dollars (1964), For a Few Dollars More (1965), and The Good, the Bad and the Ugly (1966).

Histrionics. Over-the-top antics. Shattered wine glasses and broken plates. These are just a few of the visuals that might accompany an actor who likes to chew the scenery, or dominate the screen with an extreme performance. The actor may wander the set, cling to furniture, bury his face in a couch, and leave a nice set of teeth marks as a memento.

In a film script, the slug line begins each scene and sets the stage for the events that follow. Example: INT. BLUE DOOR FIGHT CLUB – NIGHT describes the opening scene in Rocky. It consists of the general setting (interior/INT. or exterior/EXT.) followed by the specific location, then the time.

The “slug” in question is not the slimy, slow-moving creature. It’s actually a term originally used in typesetting to refer to the blank space between blocks of texts. During the early 1900s, newspaper editors would mock up the layout for tomorrow’s paper by filling these slugs with “slug lines”, or article headlines. These short descriptions proved handy in a variety of fields, including screenwriting, and the term “slug line” has been employed ever since.

You may have noticed this role in movie closing credits and thought, “What exactly does a best boy do?” As the chief assistant for either the electric (gaffer) or lighting and rigging (grip) department, the best boy is second in command, responsible for overseeing people, equipment, and scheduling. The name harkens to a time when the head of a department could approach another department and ask to borrow “the best boy you’ve got.” And no, there are no “best girls”. Female chief assistants go by the same title.

Have you ever wondered what happens when an actor is unexpectedly unable to finish working on a film? Whether it’s a matter of scheduling or mortality, the show must go on. A Shemp or Fake Shemp is needed to stand in for the original actor. The unconventional name comes from actor Shemp Howard, the brother of two of the Three Stooges, whose death in 1955 prompted the casting of a stand-in for the remaining Three Stooges movies.

In many cases, heavy makeup, prosthetics, or tricky camera angles are used, but no so in the Terry Gilliam film The Imaginarium of Doctor Parnassus. The Monty Python mastermind took the Shemp in a new direction after Heath Ledger’s untimely death, casting Johnny Depp, Jude Law, and Colin Farrell to play multiple manifestations of Ledger’s character.

Easter eggs are little surprises hidden within a variety of digital media, including films. The practice made its first appearance in the 1979 Atari video game Adventure and has since become a popular way for game developers to reward players with unexpected images and messages.

In movies, Easter eggs are “unlocked” in the sense that they require a keen eye or multiple viewings to become apparent. A few examples: R2-D2 and C-3PO appear as hieroglyphs in Raiders of the Lost Ark; the Pizza Planet truck from Toy Story shows up in every Pixar film but one; and Alfred Hitchcock has brief cameos in 39 of his films.

A sneaky plot device most commonly found in thrillers, a MacGuffin is an object, person, place, or concept that is vitally important to the characters in a film but not to the audience. MacGuffins like the falcon in The Maltese Falcon and the briefcase in Pulp Fiction motivate the characters and move the action along, but they have no value as such to the viewer.

Alfred Hitchcock used MacGuffins prodigiously in his movies and popularized the term after one of his screenwriters linked the idea to an anecdote about two men in a train. The first man notices the second is holding a strange package and asks him what it is. “A MacGuffin, a tool used for hunting lions in the Scottish highlands,” the second man replies. “But there aren’t any lions in the Scottish highlands,” says the first. “Well then,” says the other man, “that’s no MacGuffin.”