The Rise of Invented Languages, From Klingon to Dothraki

Posted by Janet Barrow in Language and Culture on May 22, 2019 0 Comments 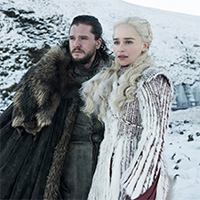 Oel naati kam? That’s ‘I see you’ – a typical greeting in Na’vi, the Avatar language. Yes, I’m talking about the big blue people, though if you’re a science fiction fan, it probably doesn’t surprise you to know that an entire constructed language, complete with complex grammar and syntax, corresponds to the Avatar people. These days, conlangs – that’s ‘constructed languages’ for the uninitiated – are more popular than ever, and more and more fans of fantasy series like Game of Thrones and Star Trek are actually learning to speak them, while others have taken to creating them.

The Origin of the Conlang

Fantasy conlangs sprang onto the scene in the mid-nineteenth century when – you guessed it – J.R.R. Tolkien, author of The Lord of the Rings and The Hobbit series, invented an entire family of fantasy languages. The languages were complex, mirroring natural languages in their interconnectedness. For example, Sindarin and Quenya, two forms of Elvish spoken by different communities, not only descend from a common ancestor, much like Spanish and Portuguese, but they are related to a whole slew of other languages, the way Spanish and Portuguese are distant cousins of English and even Arabic.

To be sure, Tolkien’s languages were not the first constructed languages to achieve acclaim. The nineteenth century saw the advent of a number of ‘international auxiliary languages’ – invented languages whose aim was to ease international communication, and which thus lacked many of the convoluted eccentricities of natural languages. The most popular amongst these, Esperanto, sought to become the lingua franca for international diplomacy. Others, like Solresol, a seven-syllable language based on the seven notes of the musical scale (created by a French violinist), had more niche ambitions.

But Tolkien’s constructed languages, with entirely artistic – rather than political – aims, appealed to a different kind of fanbase, and within a few years, his party trick was being replicated. British novelist Alan Garner soon created Skeksis, the language used by the villains of Jim Henson’s 1982 film, The Dark Crystal. Shortly thereafter, the beloved Star Trek language known as Klingon premiered in a new, fully fleshed-out version in The Return of Spock. By the early 2000s, half-baked fictional languages such as the Ubese spoken by Jabba the Hut in the 1983 Star Wars movie Return of the Jedi, would no longer stand up to the scrutiny of the growing conlang community.

This was true in part because of the Internet. The first official Conlang Listserv was invented in 1991, providing a largescale platform for language enthusiasts around the world to discuss both their own exploits in language construction and those of influential conlangers like J.R.R. Tolkien and Dr. Esperanto. The Listserv gave rise to early permutations of Internet bickering (who could have guessed?), especially between serious advocates of different auxiliary languages such as Esperanto, Volapük, and Interlingua. Eventually, a number of hot-headed members were banished to their own Auxlang Listserv, and though the original Conlang Listserv continued to flourish for a number of years, eventually finding a permanent home at Brown University, the Internet boom of the early 2000s ultimately caused the conlang community to decentralize, dispersing into thousands of smaller groups across the web.

An entire encyclopedia of conlangs now exists on the site Fraith Wiki, where you can find anything from Skerre – a fictitious pre-Iron Age hunter-gatherer language – to Ape – the language used by the gorillas and apes with whom Tarzan interacts in Edgar Rice Burrough’s 1912 novel. However, the decentralization of the conlang community continues to be lamented by some members of the original Listserv, including David J. Peterson, the conlanger behind Game of Thrones languages Dothraki and High Valyrian. Dismayed by the growing number of novice conlangers familiar with languages like Na’vi from Avatar (see above), but not with, for example, Moten (a language made by the president of the Language Creation Society) Peterson published The Art of Language Invention in 2015, a guide to language creation which includes both a great deal of dense linguistic information and a thorough history of constructed languages.

“They’re inheriting a kingdom they don’t know the history of,” says Peterson of novice conlangers. “They’re reinventing every single wheel we already perfected.” Ultimately, Peterson hopes that his book will urge inventors to ask themselves, “What do I want to say with this new language that I can’t say in my native language – or any other language that currently exists?”

Creating Languages for Game of Thrones

Peterson also uses The Art of Language Invention to discuss some of the problems that he faced while working on the Game of Thrones languages. Because Game of Thrones author George R.R. Martin had already invented certain words and phrases, it was sometimes difficult to come up with consistent spelling and pronunciation systems while remaining true to Martin and to fan expectations. For example, unbeknownst to Peterson at the time he was developing the language, Martin actually pronounces Dothraki with the emphasis on the first syllable – “DOTH-rock-ee,” which conflicts with what Peterson considers to be the correct, second-syllable emphasized pronunciation – “doth-ROCK-ee.”

We also learn that High Valyarian – once the language of a vast empire that conquered many lands – is loosely modeled after Latin and the influence that the Roman Empire had in creating the Romance languages. Much as Latin gave birth to Spanish, French, Romanian, Portuguese, and Italian, High Valyrian is the mother of a number of ‘Bastard Valyrian tongues’ that we hear throughout the series.

Peterson also says that Dothraki is supposed to sound harsh, which is why it incorporates many guttural ‘ch’ sounds (as in ‘Loch Ness’). This gives it a loose resemblance to Arabic or German, languages that English-speakers typically consider to be harsh sounding. Some critics have taken issue with Peterson’s failure to examine the politics behind such a decision and are careful to note that ‘harshness’ as a sound characteristic is entirely subjective and culturally determined.

Ultimately, the goal of many conlangers is to push the boundaries of our understanding of language by taking it places that don’t yet exist in natural language. E-Prime, a version of English with no ‘to be’ verb, aims to separate opinion from fact by removing subjectivity from language. Láadan is a feminist language specifically designed to better express the views or sentiments of women (i.e. the word ‘widazhad’ means ‘to be pregnant late in term and eager for the end’) and was created in reaction to the hypothesis that natural Western languages may be better suited for the expression of men’s views than women’s views.

Like any artform, inventing a language is ultimately an act of cultural interpretation. And some conlangers have interesting ideas about the practical uses their art may have in the future. Says Peterson, “Someday in the future we may encounter aliens, and they may have a communication system that doesn’t even qualify as a language to us, that we wouldn’t think of as language…but the more we’ve seen, the more we know about, the more we postulate, the better we are going to be able to tackle something like that. Whereas if we’re all speaking English at that point in time, and have kind of forgotten all the other languages, we’re really going to be [screwed].”

Interested in learning more about languages? To view more of ALTA’s services, including translation, training, interpretation, and testing, visit: www.altalang.com.