Posted by Ash Edwards in Language Training on September 25, 2013 7 Comments 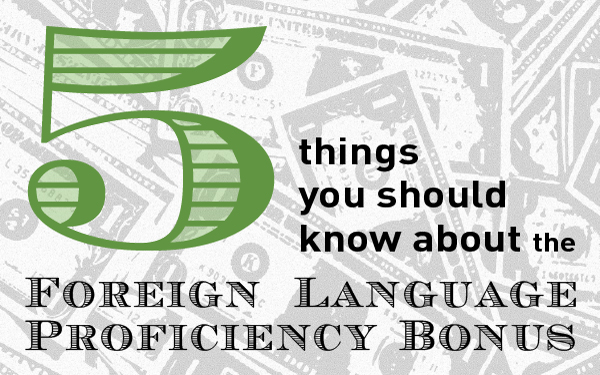 2. FLPB is designed to compensate soldiers that speak a foreign language for maintaining their linguistic skills. Provided a soldier tests well enough, pay rates range from a minimum of $100 to a maximum of $500 per month, depending on the language or dialect and documented proficiency level. Soldiers may test in more than one language to increase their FLPB rates. Those who test well enough in more than one language may receive up to $1,000 per month depending on the languages and test scores.

4. There are still ways to get paid for languages not on the list:

“(C) Soldiers with a language dependent MOS I.A.W. AR 11-6 PARAGRAPH 6-4 and assigned a CLANG or PLANG that is not listed in this ALARACT and are proficient in their CLANG/PLANG will be paid at the A-List level for their CLANG or PLANG.
(D) Although the Army no longer has a payment List C, soldiers assigned to language coded MTOE or TDA billets who are proficient at the 2/2 level or above in the language of their billet will be paid at the C-List level I.A.W. AR 11-6 TABLE 6-2. This also applies for languages not specifically listed in this ALARACT.” [Source: ALARACT 031/2013]

5. The Defense Language Proficiency Test (DLPT) measures your ability to read and listen in a foreign language. Military linguists take it yearly to determine FLPB. The current test is called DLPT5. ALTA Language Services was contracted by the Defense Language Institute to perform standard-setting studies / workshops to set the cut-scores for the lower-range DLPT 5. ALTA completed the work in early 2011, and our results were approved by the government and put into use.

ALTA Language Services can help you increase your DLPT score thus increasing your FLPB. Get started today! Read more about our Defense Language Proficiency Test prep courses here. You can also call us at 404.920.3816 for more DLPT training information.