Posted by Daniel Echevarria in Language and Film & Music on September 30, 2010 0 Comments

Spinning Languages is a monthly feature by Beyond Words that highlights albums from around the world. This month we’re showcasing three great albums from Nigeria, Laos, and Brazil. You can order all of them directly from the excellent music store Other Music. Enjoy these tunes! 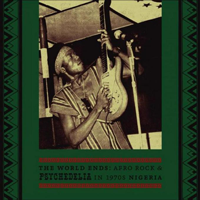 The World Ends is the latest title from Soundway Records showcasing a wave of guitar driven and psychedelic groups that sprung up in Nigeria during the early 1970s. Featuring 32 electrifying and funk laden grooves, this is the sound of a generation attempting to pick up the pieces after the devastation of the Nigerian civil war.

Spread over 2 CDs and 2 triple gatefold LPs, this bumper collection is brimming with youthful exuberance, fuzzed out guitar and cosmic organ vibes and owes much to the psychedelic sounds of Jim Morrison, Santana, Hendrix, Jefferson Airplane and James Brown.

As the summer of love was blossoming in London and San Francisco, Nigeria was imploding into civil war. Also known as the Biafran war of 1967, it was a grisly conflict taking over three million lives yet at the same time as the country was being pulled apart there was a new world beginning. The tracks featured represent a forgotten chapter in Nigeria’s musical history when the youth threw their varied morsels into the pot from hard rock to psychedelic soul when guitars were cherished instruments, symbolic of a new movement, when highlife and Afrobeat played second fiddle to ‘the beat’. — © Soundway Records Ltd

Attapeu is the southern province of Laos, bordering Cambodia and Vietnam, it is famous for having received a huge amount of American bombs during the Vietnam war. Here you can listen to KANYING and HAMONG, 2 subgroups of Brao people, half of the Braos are living in Cambodia and the other half in Laos , they belong to the MON khmer family and are the first inhabitants of this area. With other ethnic groups south and west, they share a lot musically, especially the fascination for gong playing in animist ceremonies, but also similar bamboo instruments. The music can be divided in 2 categories according to the purpose: Various bamboo instruments and singing being used in entertainment music, and ensembles of gongs being used for animist ceremonies. — © Kink Gong Records 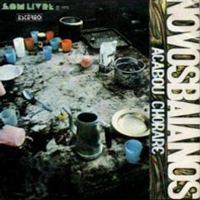 The second album by Brazil’s Novos Baianos, released in 1972, is widely considered to be their best, and a high water mark for the Musica Popular Brasileira. These ten tracks burst at the seams with samba-based brilliance as it spills over into Brazilian folk, fuzz-pop, rock & roll, and sun-baked dance rhythms. As the summer burns off, this music actually retains the heat of seasons past, and will be certain to bring you back to the sweltering frenzy of life lived in the wake of some of the most incredible cultural fusion you’re likely to hear in this lifetime or any other. No amount of hyperbole could anticipate the smile that this album will bring to your face. — © Doug Mosurock, Other Music

Preview the album’s tracks below. We recommend track 10, ‘Preta, Pretinha’: